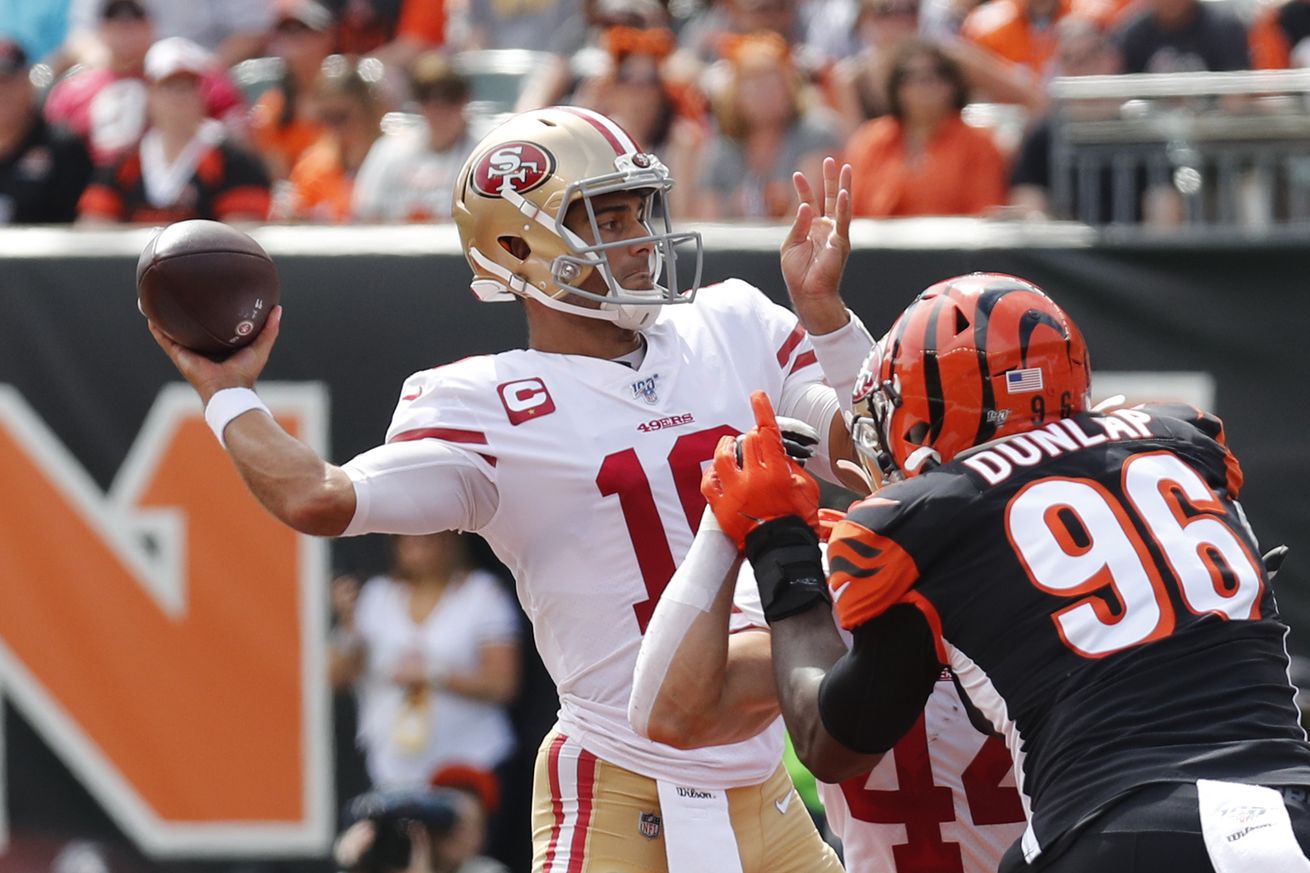 If Kyle Shanahan continues to scheme like this, the 49ers may not lose another game.

41. The most points the 49ers have scored in nearly 21 months since quarterback Jimmy Garoppolo curb-stomped the Jaguars at home. 572. That’s how many total yards the 49ers’ offense put up against the Bengals this past week — which happens to be the fifth-most in franchise history.

Head coach Kyle Shanahan’s most shining moment with the 49ers came this past Sunday, scheming his guys wide open for a touchdown after touchdown.

After a shaky season debut by Garoppolo in Tampa Bay, the 49ers’ $137M man showed up against Cincinnati, throwing for 296 yards on just 17 completions, to go along with three touchdowns. The 49ers’ signal caller had one head-scratching blunder but was flawless aside from that.

Let’s take a look at some of the highlights from this past Sunday’s showdown.

In this first play below, Shanahan fakes a jet sweep to wideout Deebo Samuel, while sending tight end George Kittle, running back Matt Breida and wideout Marquise Goodwin to the right side of the field. Blockers get out in front of Samuel, and now Garoppolo has the defense fooled. The 49ers put the ball in one of their fastest players and now Samuel’s racing down the sideline. Shanahan continues to decoy the offense to one side of the field while setting up the real action on the opposite side.

In this first play, WR Deebo Samuel gets out to the left, with blockers in front. Shanahan's design has a play-action fake to the right, sending defenders to the right. Garoppolo looks back to his left and now Samuel has the ball and blockers in front for a 38-yard gain. pic.twitter.com/VOUPlardw2

More of Shanahan’s intelligence is on display. He keeps fullback Kyle Juszczyk and Breida on underneath routes, freezing the Bengals’ linebackers. Shanahan sends Goodwin on a post route down the middle of the field, carrying the cornerback and safety with him. The 49ers’ play-caller follows that up, sending Samuel to the middle of the field right under Goodwin and over the Bengals’ linebacker. That route combination leads to Samuel finding the open spot and being open for Garoppolo.

More Shanahan wizardry. Goodwin runs a post route, taking the safety and the cornerback with him. Samuel now has one-one-one and is able to get open in the middle of the field against Kirkpatrick. Juszczyk and Breida stay underneath, causing the LBs to stay with them. pic.twitter.com/aT5T1JJogp

This next play is more about the Bengals’ defense being confused than the 49ers’ offense being successful. Shanahan stacks up Goodwin and Samuel, with the Bengals in man coverage. Cincinnati’s corner Dre Kirkpatrick follows the wrong receiver out of the break, and Samuel finds himself wide open in the end zone. And as Kyle Posey says, it’s a “tuddy.”

#49ers stack Samuel and Goodwin, while the #Bengals are on man coverage. Cincy's DBs get mixed up and Kirkpatrick takes one step the wrong way, chasing Goodwin instead of Samuel. As a result, Samuel's open and as @KP_Show says, it's a tuddy. pic.twitter.com/3WBBL8m9Il

Watching this play live, I was as mind boggled as most of the fans at home. It seemed like Garoppolo was throwing into quadruple coverage and just aired it out like a classic Brett Favre throw. But re-watching the tape, Bengals’ corner William Jackson III doesn’t sit on the underneath route and continues to keep running up the field. While wideout Richie James beats the initial coverage, Jackson III has beaten him to the ball, and it’s an easy INT.

The one Garoppolo WTF throw of the afternoon. Bengals' Jackson III doesn't sit on the underneath route and continues to stay high. Garoppolo doesn't recognize this and targets Richie James, who's triple covered. As a result, it ends up as an INT. pic.twitter.com/rsBgLjzfhi

More genius route combinations from Shanahan against a Bengals’ zone defense. Shanahan keeps wideout Dante Pettis and running back Raheem Mostert on underneath routes to freeze the linebackers. The head coach then sends one receiver on a go route, taking the safety and corner with him. Then Shanahan follows that up by sending the other receiver on a deep drag in the zone that’s cleared out. It ends up, resulting in an easy completion.

More genius design from Shanahan against a Bengals' zone defense. Shanahan keeps Pettis and Mostert on short, underneath routes, freezing the LBs. Shanahan sends one WR on a go-route, taking the CB and safety with him. Shanahan sends the other WR on a deep drag route behind him. pic.twitter.com/juv4dW4hEQ

This might have been Shanahan’s best play as a 49ers’ play-caller. Uses play action with Breida — faking out four defenders — sends Kittle across the formation, which causes most of the defense to follow. Then, Goodwin sneaks by the defense in the opposite direction, and he’s wide open headed to make a house call for six.

Shanahan's in his BAG. Play action with Breida fakes out FOUR defenders. Sends Kittle on a crosser to the left and sends Goodwin to the right. The safety slides towards Kittle and Goodwin's walking into the end zone with nobody around him. pic.twitter.com/y24YMOGy8y

Kittle ends up being the perfect decoy in this play. When Garoppolo throws this lateral to Pettis, most of the blockers for the 49ers head towards Samuel — who’s lined up top. Pettis looks at Kittle, which causes the Bengals’ defense to react. Pettis turns and throws to Samuel, who now has blockers and the speed to turn it into a huge gain.

Kittle might be the league's best decoy at this point. Garoppolo throws a lateral pass to Pettis, while Kittle runs a post route, taking a Bengals' safety and corner with him. On the left side, Goodwin breaks out open with multiple blockers in front of him. Boom. 18-yards. pic.twitter.com/CdvCp9MgAD

Now, Cincinnati sends a slot blitz and the 49ers throw a screen pass to running back Raheem Mostert right into the blitz. Next thing you know, Raheem Mostert and his 4.3 speed are celebrating in the end zone.

Bengals send a slot blitz and the 49ers throw right into the blitz, by hitting Mostert with a screen pass. Now, with three defenders and three blockers, Mostert turns on his 4.3 speed and turns it into a touchdown. pic.twitter.com/d46PHjrIXJ

This is just simple pre-snap recognition from Garoppolo. They motion Kittle into the formation and with the Bengals’ defensive back moving in, the offense knows that it’s man coverage. With the defender opposite James lined up far off of him, James runs a shallow crosser and it is an easy pitch and catch for seven yards.

Kittle motions into the formation and Kirkpatrick follows -- signaling man coverage. James is lined up in the slot and with the DB lined up five yards away, he gets easily open on a shallow crosser and it's a 7-yard gain just like that. pic.twitter.com/iZnBtYvR6C

Now Kittle motions into the line of scrimmage, like he’s about to block for a run play. The 49ers run another play action, while Kittle runs across the formation. The defender on Kittle takes one step in and Kittle’s speed is on full display. Next thing you know, it’s a gain for more than 30 yards.

Once again, Kittle motions across the formation -- signaling man coverage. He lines up like he's about to block for a run. Garoppolo uses play action to suck in the defenders and now Kittle's open in the flat for a 36-yard gain. Garoppolo also probably could've hit Goodwin too. pic.twitter.com/PMTwoC0bO5

Shanahan’s offense is designed with beautiful route combinations to open players up, misdirections for the defense and when executed, it’s built to beat the brakes off of opponents.